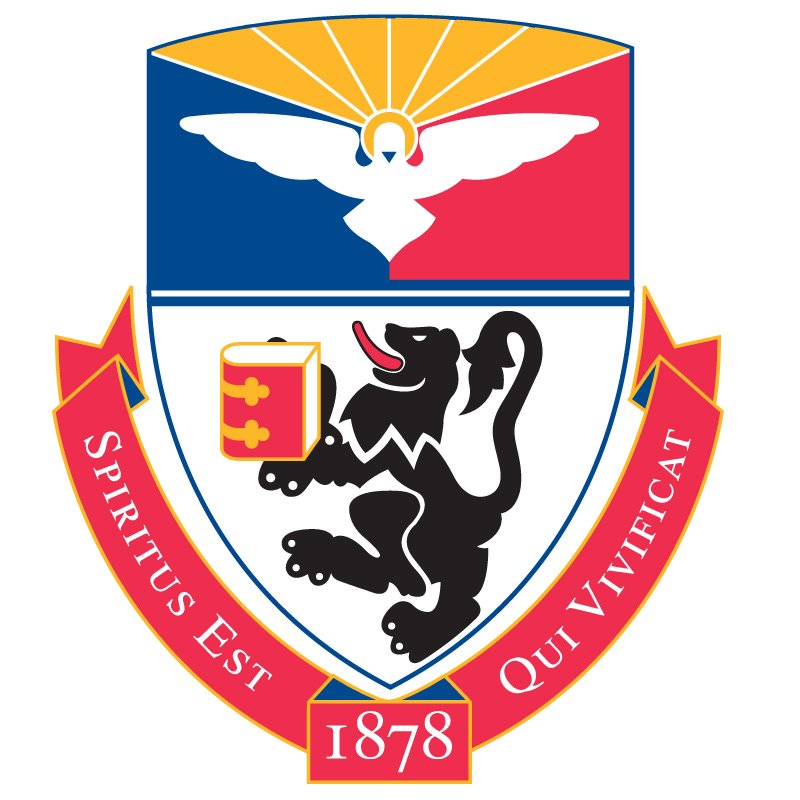 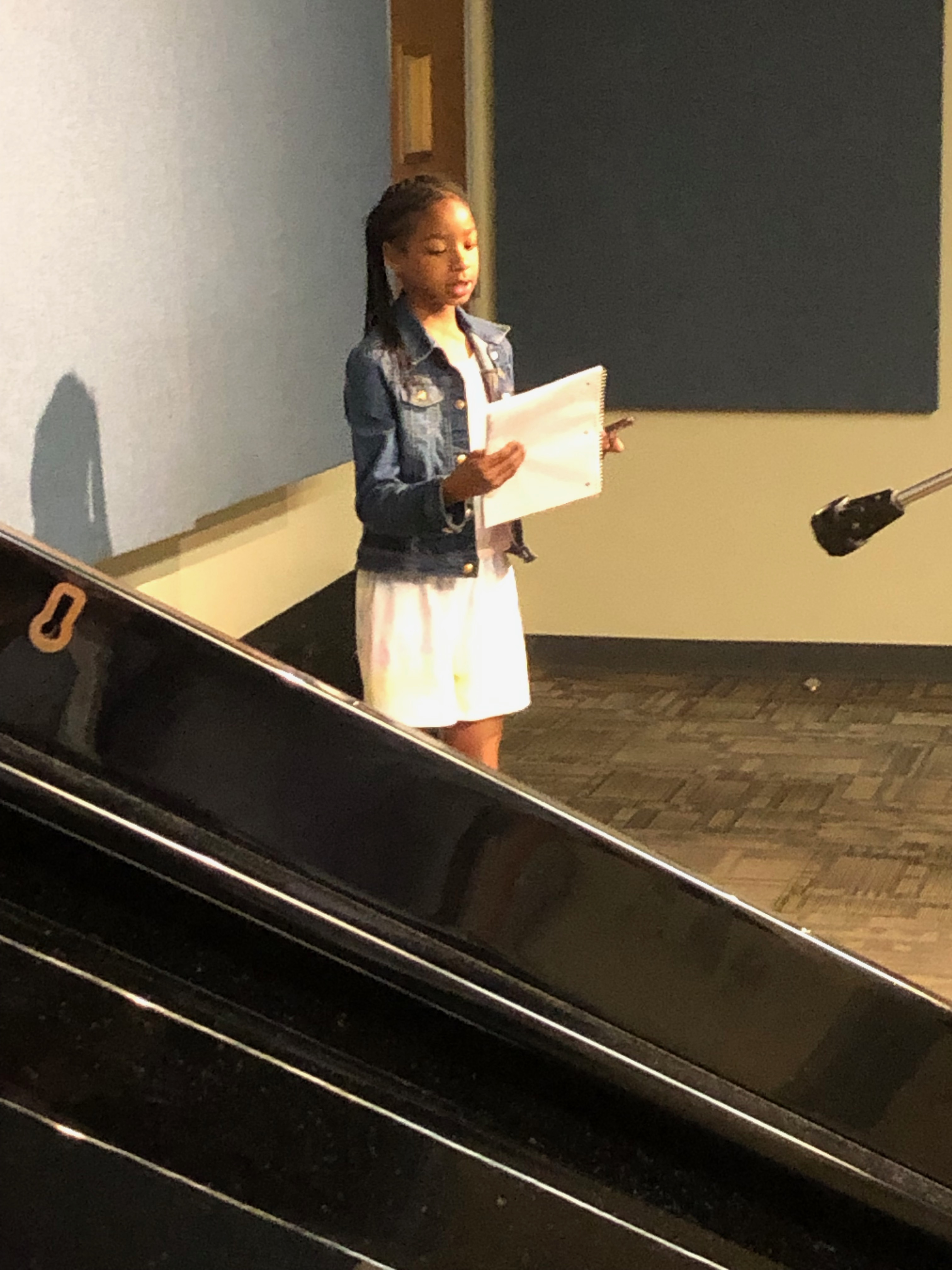 Over the course of two days, students were in the Mary Pappert School of Music's 109 Recording Studio, collaborating with rapper Shad Ali, the band TRIO+ (Jason Rafalak, Ryan Socrates, and Dr. Joseph Sheehan), and recording engineer as well as graduate student, Ian Goss.

At the first session, students got a tour of the studio equipment; saw an example of hip-hop/freestyle created in the studio by Shad and TRIO+; wrote poetry based on several prompts to be used as spoken word/verses for rapping; and created a live hip-hop track. Most of the students were brave enough to step up to the microphone and record something, sometimes by themselves, and sometimes in small groups. One student, Dior, even wrote and recorded her very own verse that day!

At the second session, Ms. India Murphy had the students create and prepare their own rap verse to Cardi B's "Money" in advance of the session. We spent most of the time recording this material in small groups with the live band. The track represents all of the voices, creativity, and positive energy from all of the participants that day, so it's something we can all be proud of. We also had time to record, with the live band, another original track by Dior, and one created by Ms. India Murphy.

Ian Goss, the recording engineer, edited and mixed all of the tracks from both sessions.  Once completed, the audio files were shared with the ACH Clear Pathways staff and students were invited to share their music online with family, friends, and the public; add video, etc.  At the end of the summer Showcase, the student's work was played as background music for a video highlight reel. 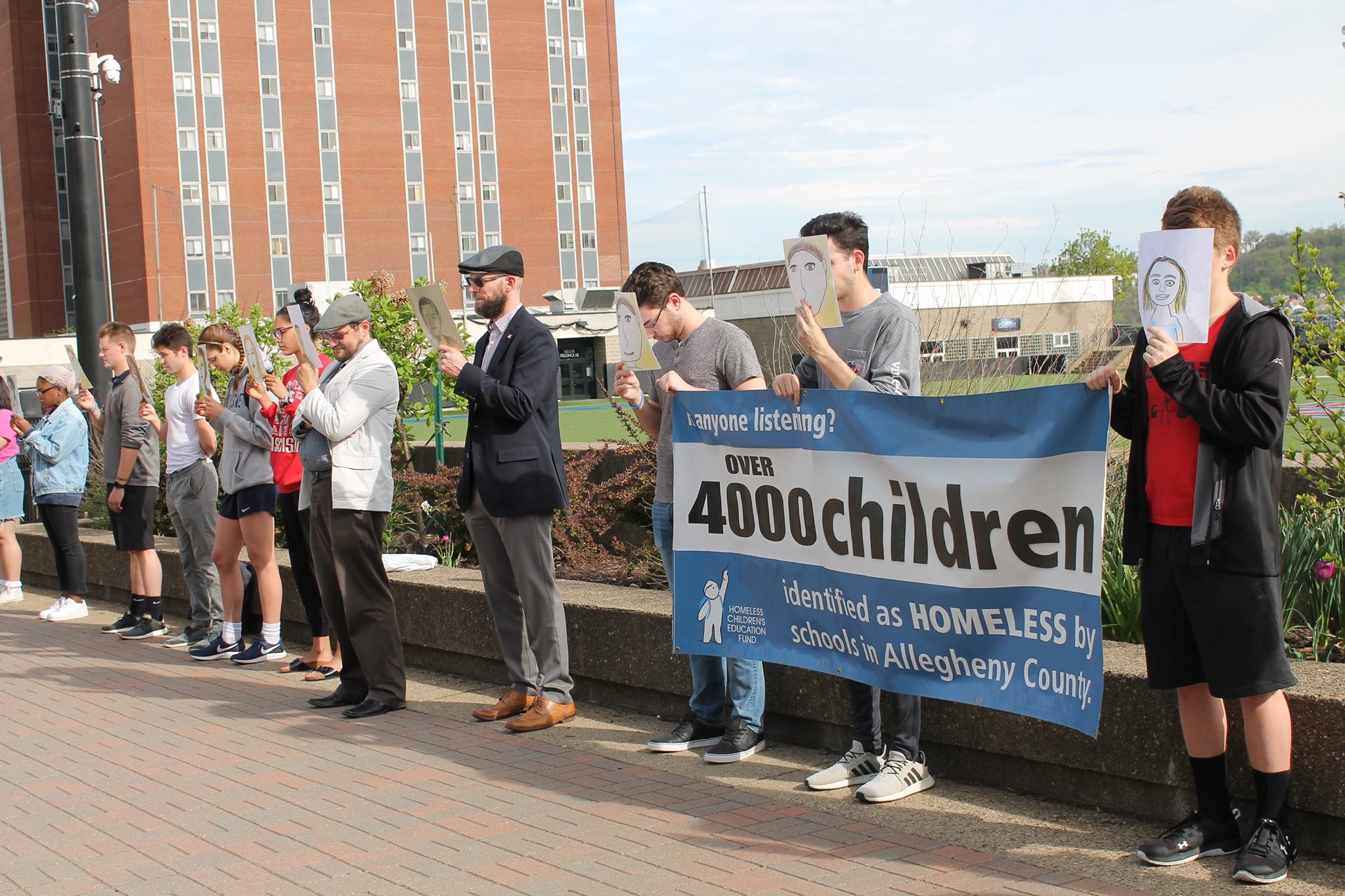 Duquesne students in Communication work with the Homeless Children's Education Fund each semester to put on an art installation to raise awareness about the 4128 Allegheny County students who were identified as homeless during the 2017/2018 academic year. 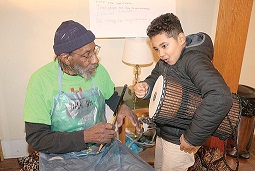 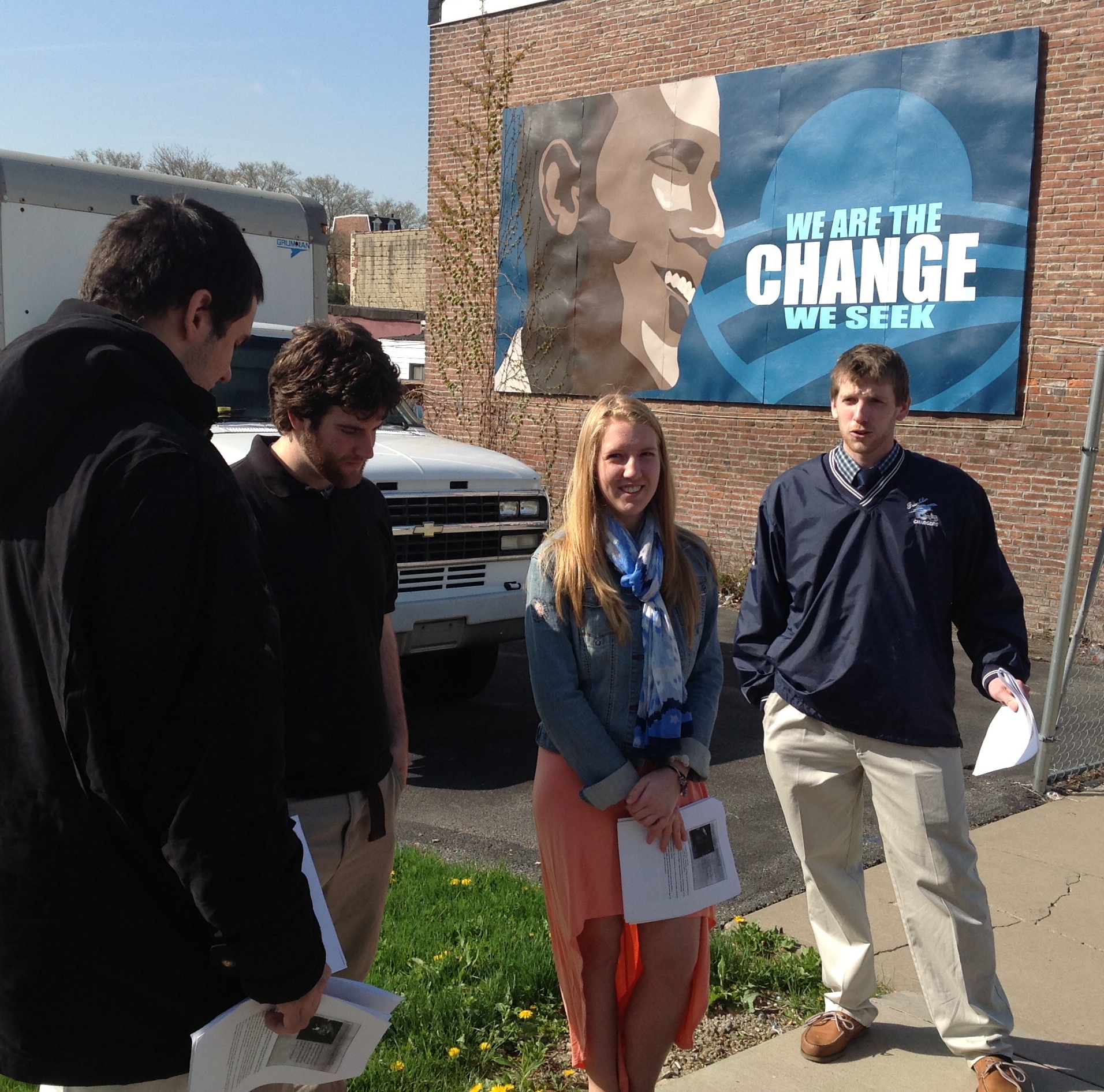 The Duquesne University Honors College is a diverse collection of students and faculty from each of Duquesne’s nine undergraduate divisions, dedicated to achieving exceptional standards of personal and academic excellence. Its size (approx. 600 students) and multidisciplinary nature make it the perfect fit for Duquesne’s first “Signature Partnership” – a long-term, single commitment to the August Wilson House (a project of the Daisy Wilson Artist Community).

In 2011, the partnership began in an inspired meeting between Paul Ellis, Executive Director of AWH, and Kathleen Glenister Roberts, Professor and Director of the Honors College. We framed the enterprise around opportunities for young people in the Hill District and in the Honors College to break out of typical expectations. Drawing on Duquesne’s Spiritan Catholic identity, Honors College students dive into the poetry and drama of August Wilson, think deeply about how they can contribute to the transformation of his childhood home, and are humbled in a spirit of reciprocity with their neighbors on the Hill. 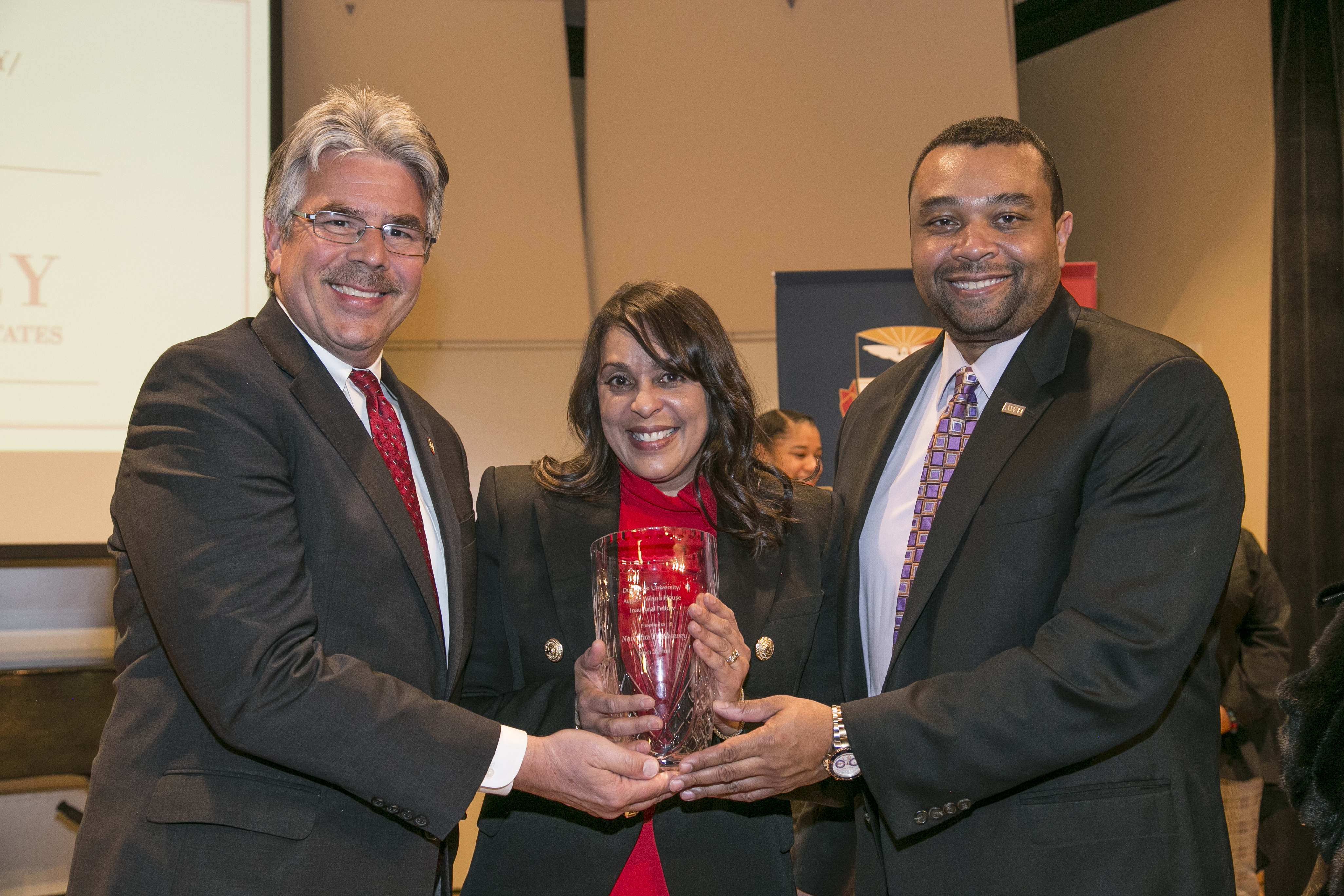 Launched in 2018 with U.S. Poet Laureate Natasha Trethewey as the Inaugural Fellow, the Duquesne University/August Wilson House (DU/AWH) Fellowship provides opportunities for artists of color in varied media to engage in cultural and artistic expression.  The Fellowship  advances the Fellow’s work and serves the joint interests of Duquesne  University, August Wilson House, and the community. The Fellowship is designed to bring national and regional artists and scholars into a collaboration between the famed playwright's Hill District neighborhood and educational and artistic institutions.

Supported by a grant from the Nancy Jones Beard Foundation, DU/AWH Fellows serve as artists/scholars-in-residence.  Fellows live on Duquesne’s campus while developing their own creative work and participating in educational events with the University, the August Wilson House, and the community. 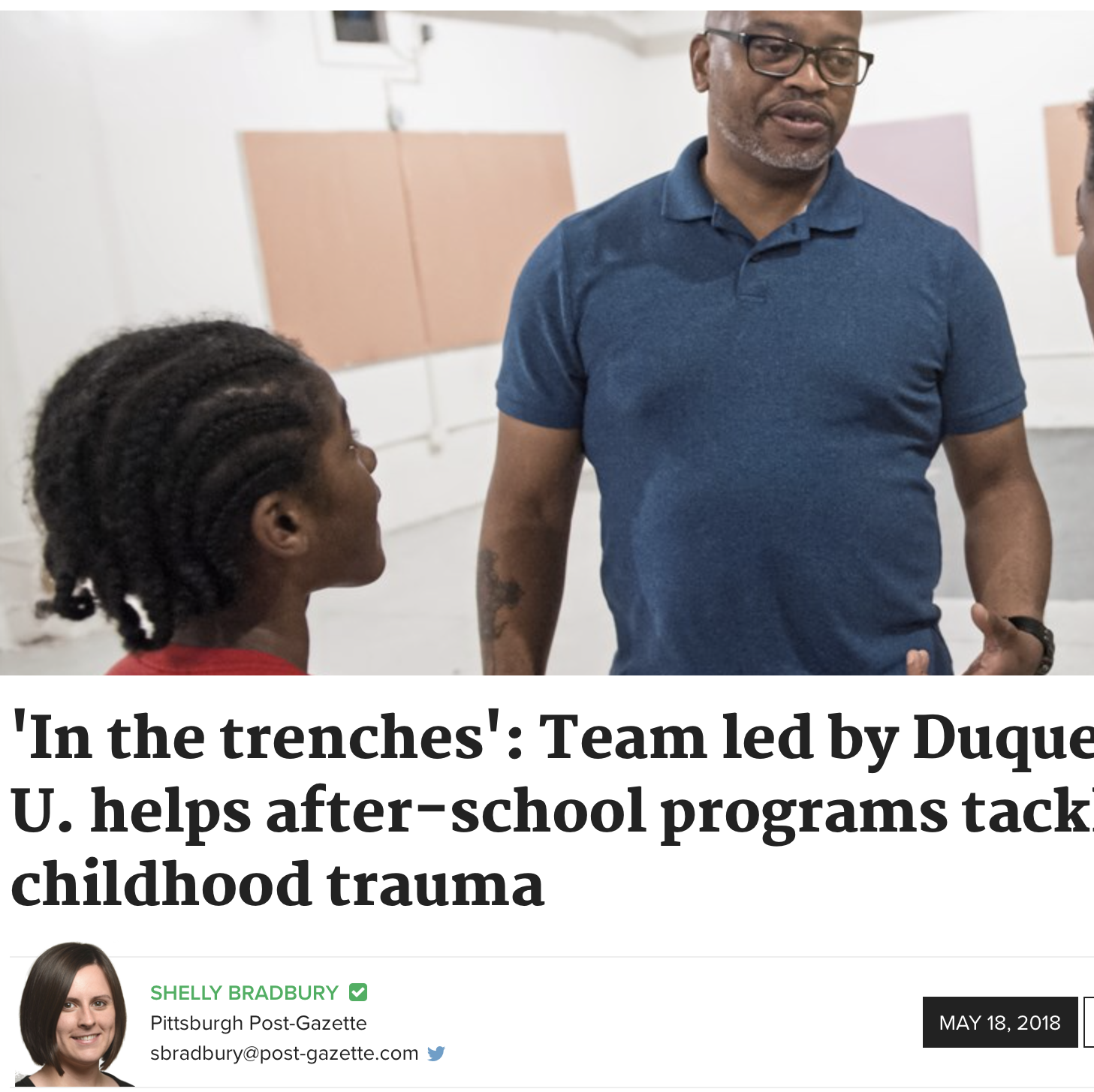 Together with community partners from the Hilltop South neighborhoods we have developed and piloted a training in trauma and resiliencer care for staff of afterschool programs who work with children in communities that have expereinced poverty and public violence.  In collaboration with Steel Smiling, a neighborhood organization that focuses on mental health issues in predominantly African American communities, the program is being expanded to include adult trauma as well and to work with different contexts, such as the public defender's office and potentially prison environments. 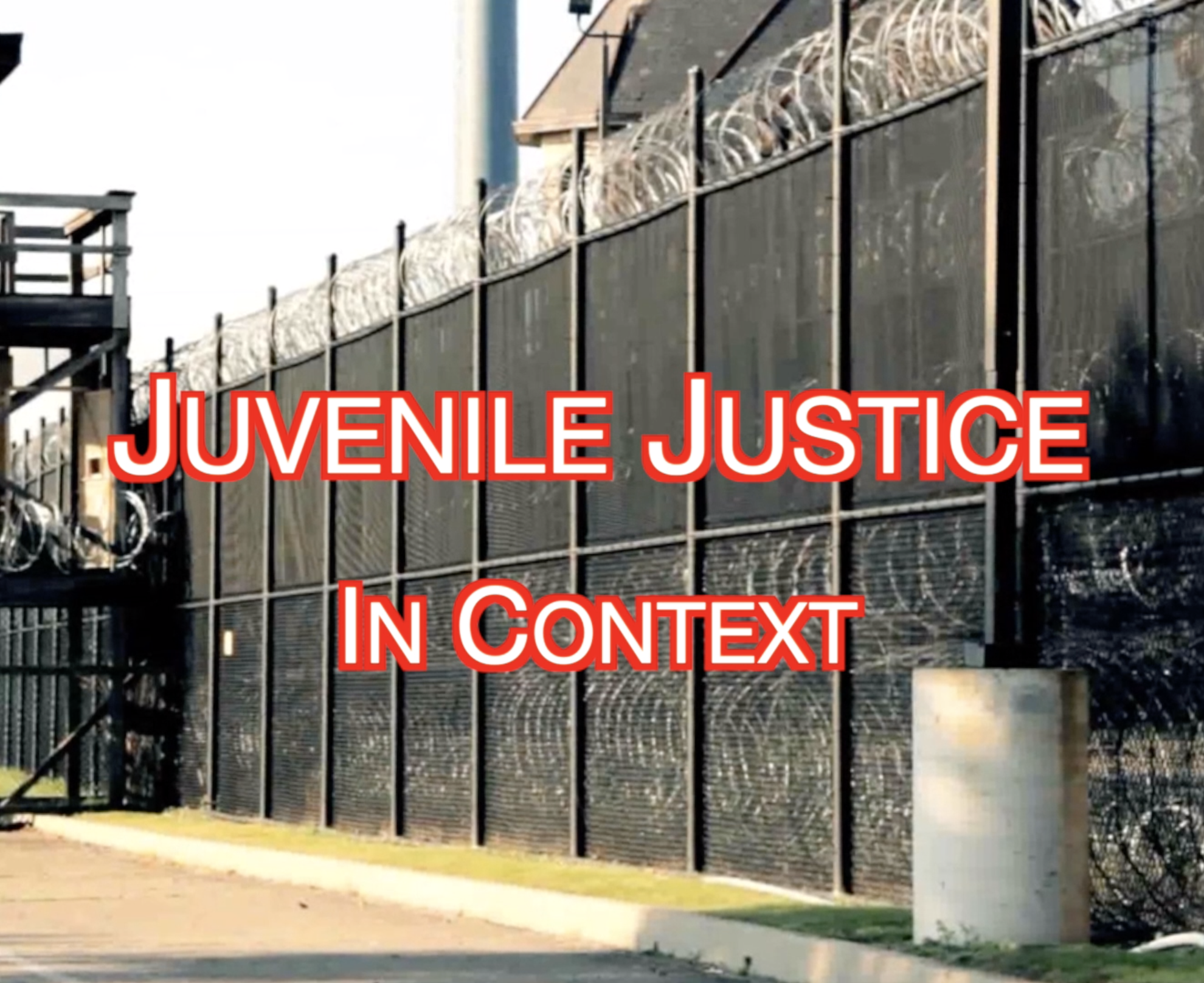 This project is an advocacy project on behalf of juveniles who have been incarcerated with life sentences with or without parole.  My community engagment/qualitative research lab, PlaceLab, has developed a documentary film which interweaves the qualitative data about the context of gang violence in Pittsburgh and its effects on communities and children, with the personal story of a juvenile lifer incarcerated without parole, and with the psychological research  on adolescent brain and social development.  The film is an example of a mediation video produced for a particular court hearing, but is in the process of being expanded to a full length documentary about adolescent's expereince of community violence and its fall-out and the movement to community restorative justice. 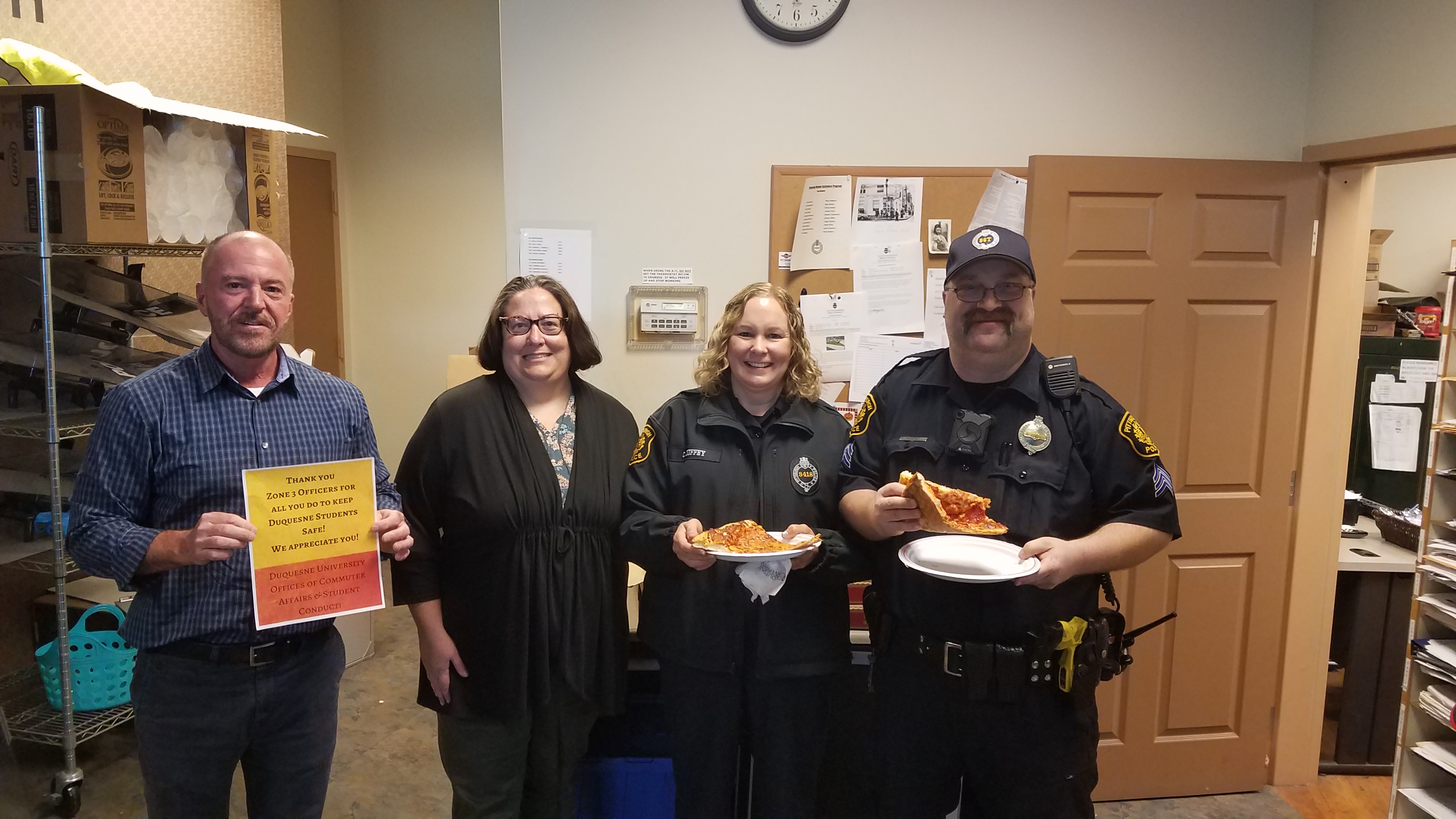 Director of Commuter Affairs and Director of Student Conduct took pizza to the Pittsburgh Bureau of Police, Zone 3 to thank them for their on-going efforts in working with/assisting us with Duquesne students who reside on the South Side. This is a part of our ongoing efforts to build and maintain authentic relationships with our community partners. 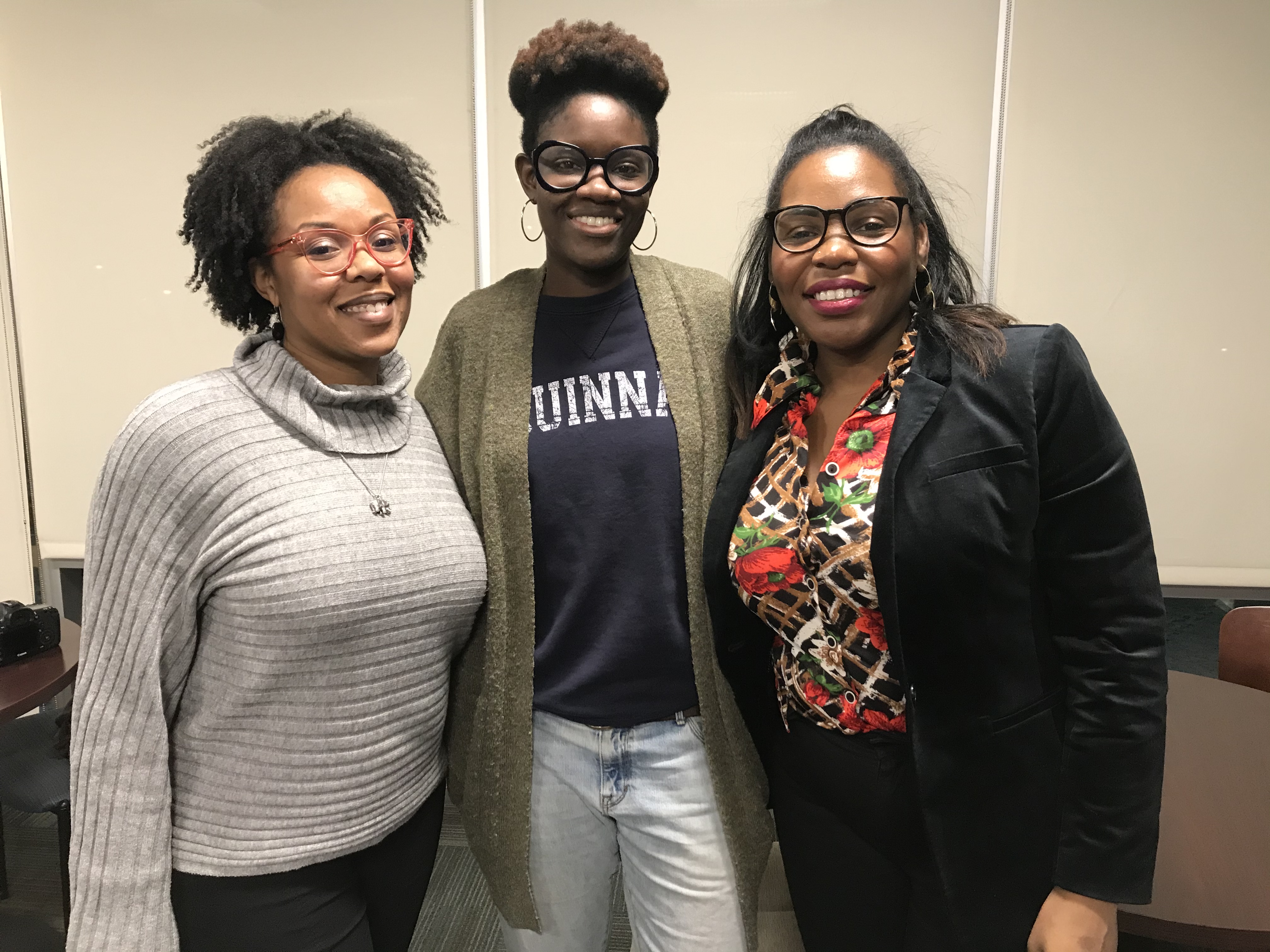 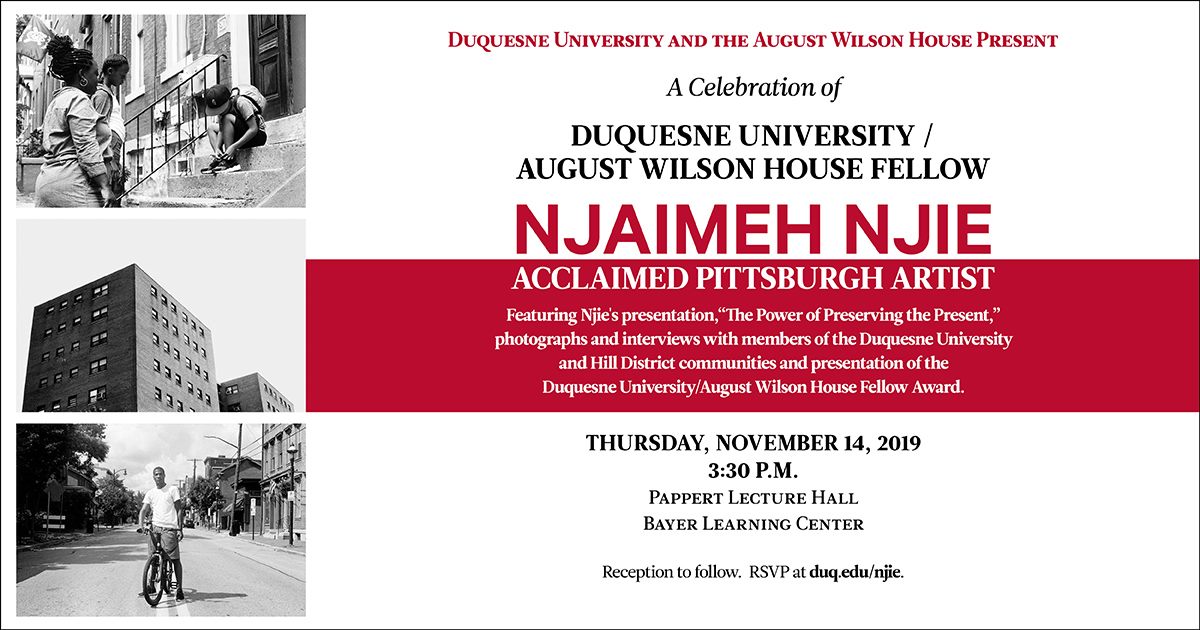 The Power of Preserving the Present 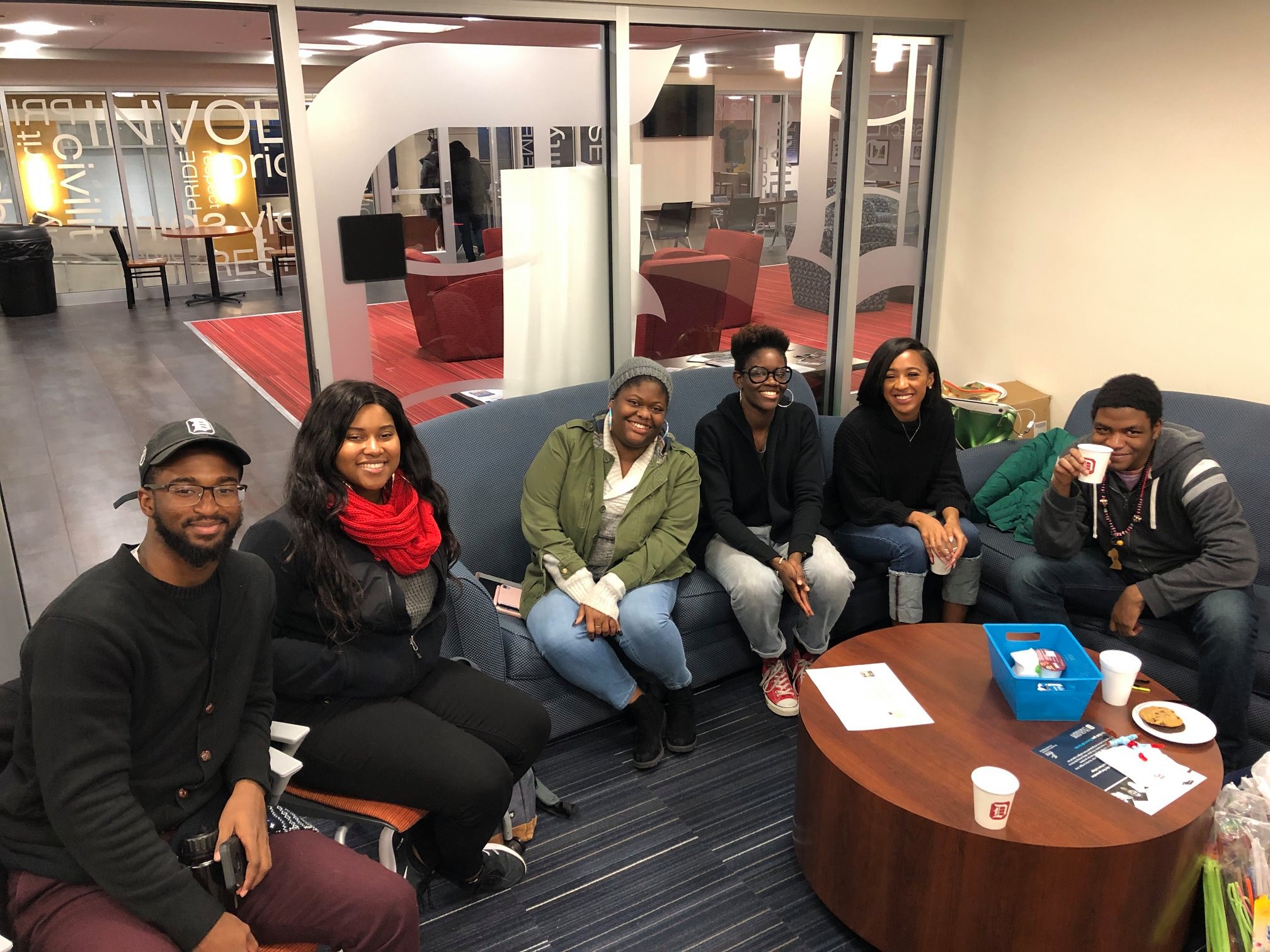 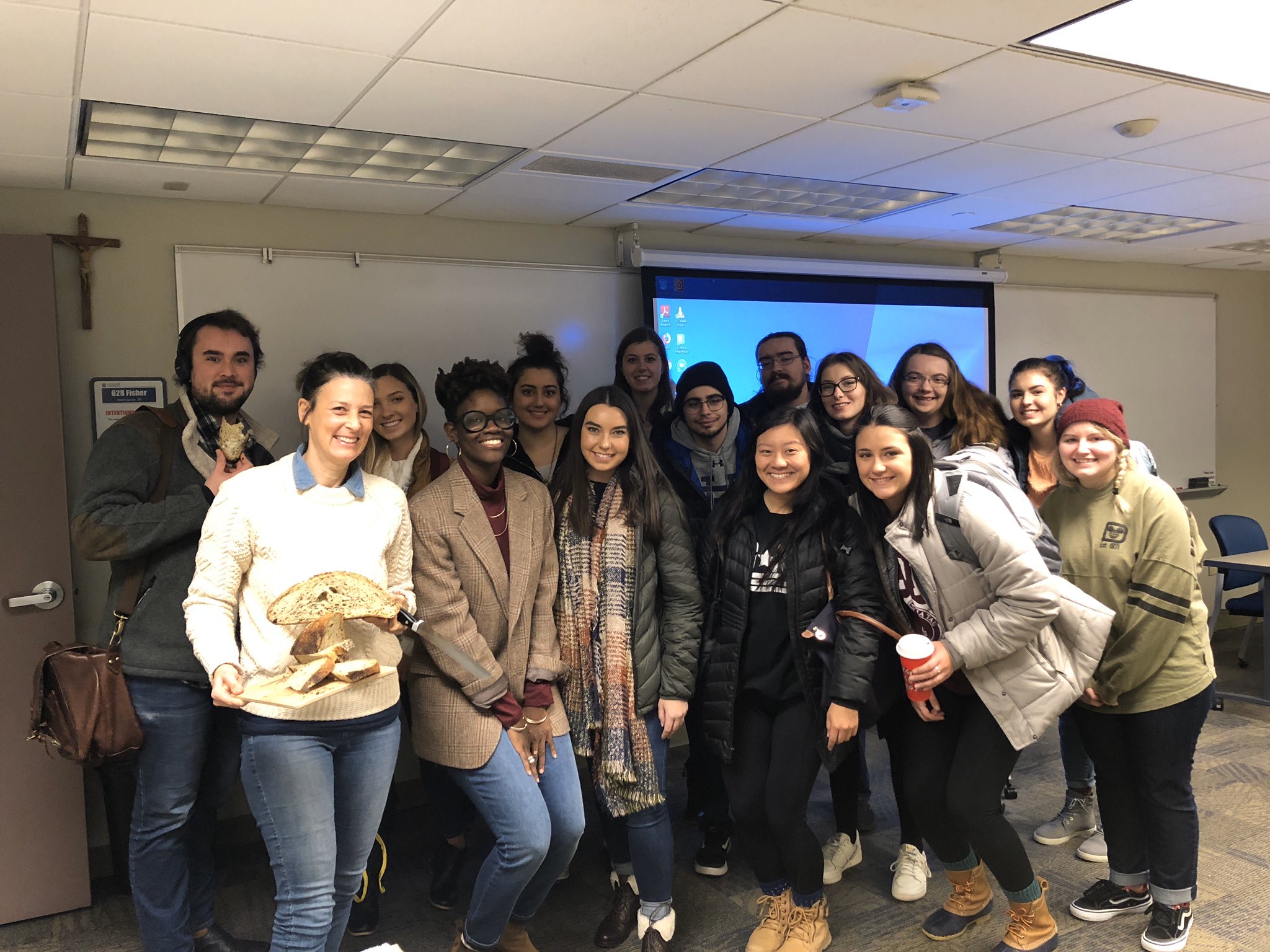 Find activities between Duquesne University
and the surrounding community.

At Duquesne University, our faculty, staff and students share a deep commitment to making our world a better place. Through Spiritan Campus Ministry, community service projects, community-engaged learning classes and community-engaged research, the Duquesne family has the opportunity to participate in hands-on outreach that makes a real difference right here in Pittsburgh or as far away as Africa.